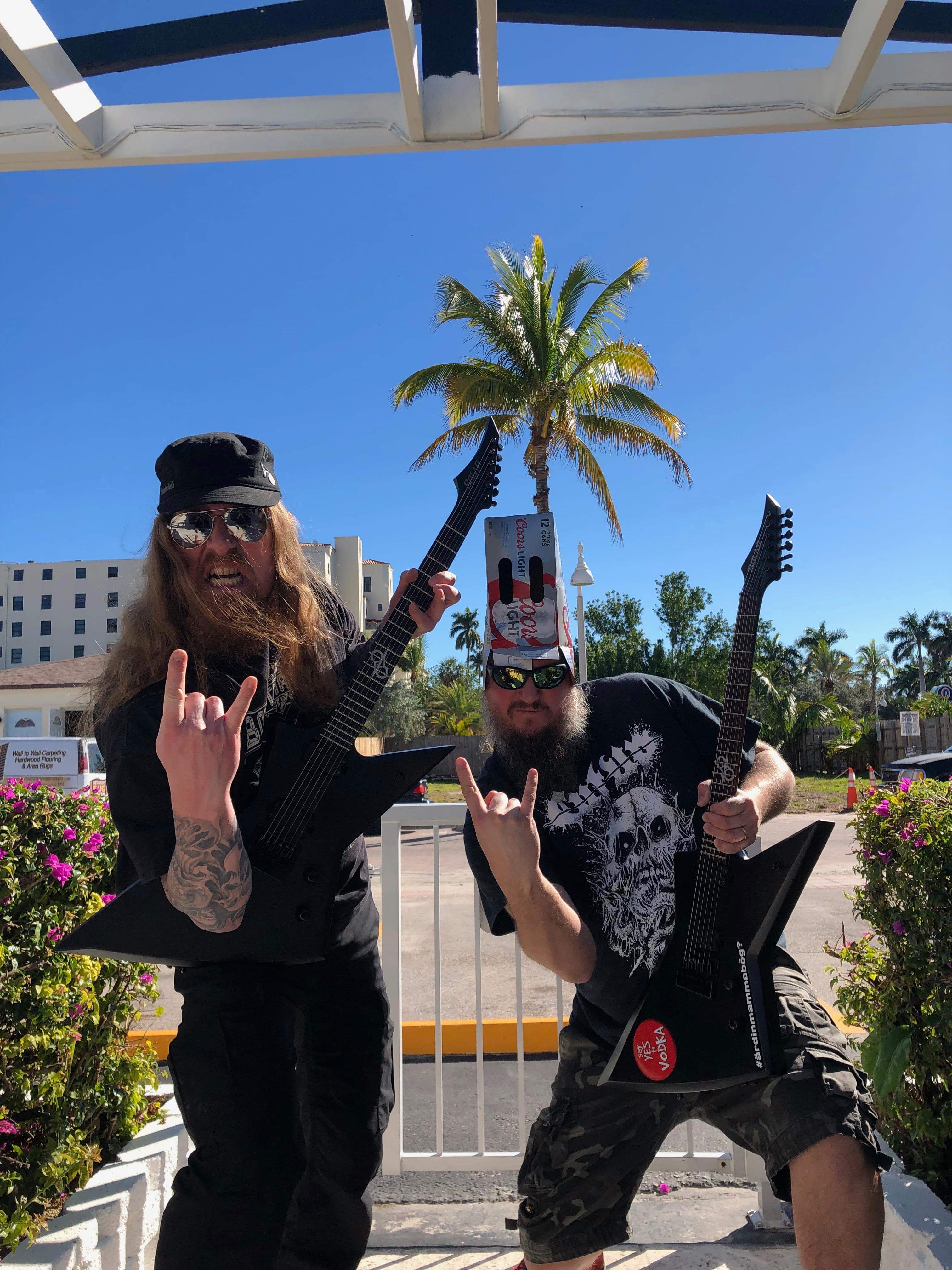 Vomitory was formed in 1989 by guitarist Urban Gustafsson during the birth of the globally well-known Brutal Swedish Death Metal scene. Ever since, they have constantly and brutally delivered straightforward grinding Death Metal. While being a part of the phenomenon that was the Swedish Death Metal scene, the early and most important influences were spelled Sodom, Slayer, Entombed, Bolt Thrower, Napalm Death, Grave and Carcass. During the first years, Vomitory spread their name in the worldwide underground Death Metal scene by releasing a few demo tapes and a vinyl 7″ single.

When the Death Metal scene was getting saturated and began to stagnate in the mid 90’s, a lot of the “brutal” bands disbanded or changed their style drastically to something commercially more marketable. Vomitory refused to go in that direction, but released their debut full-length album instead, “Raped In Their Own Blood”, in November 1996 (Fadeless Records). It was greeted with great respect within the underground scene and gained a lot of fans, which of many to this day have stayed loyal to Vomitory.

Their second album, “Redemption” (1999, Fadeless Records), showed a pretty big musical progress from the debut. The increase of brutality and intensity in their music was obvious. Now, they were well on their way to find their own formula. After two albums and one 10″ mini-LP on Fadeless Records and some smaller European tours, Vomitory teamed up with well-renowned Metal Blade Records. Now the band had been reduced from five to four members – bass player Erik Rundqvist took over the vocal duties as well from then on. A successful European tour as support for Cannibal Corpse and the No Mercy festivals in 2000, passed and in November the same year Vomitory released their third album – their first for Metal Blade – “Revelation Nausea”. It was with this album Vomitory cemented their style and sound of which they have become known for.

Since Vomitory signed to Metal Blade Records in late 1999, they have toured with the likes of Cannibal Corpse, Vader, Marduk, Nile, Malevolent Creation, Hypocrisy, Deicide, Krisiun, Dark Funeral, Amon Amarth, Kataklysm, Immortal – to name a few – and played many of the major metal festivals in Europe.

The fourth album, “Blood Rapture” (2002), and the fifth, “Primal Massacre” (2004), gained more excellent reviews in the metal media, more European tours and festival shows and Vomitorystrengthened their position in the scene even further. “Blood Rapture” has proved to be a fan favorite, featuring live classics such as “Chaos Fury”, “Blessed And Forsaken”, “Rotting Hill” and the title track “Blood Rapture”.

By the end of 2005, the newest member of Vomitory was added to the ranks – lead guitarist Peter Östlund. He brought well-needed new blood and energy into the band that have had a downward period during most of 2005. The writing process for album number six literally exploded and by the end of 2006, the sonic monster entitled “Terrorize Brutalize Sodomize” was recorded at Leon Music Studios with producer Rikard Löfgren – a co-operation that proved to be very successful. “Terrorize Brutalize Sodomize”, which was released in April 2007, showed a refreshed Death Metal band with new-found energy that never had sounded better. With Östlund now in the band, new musical ideas could be worked out, and that clearly showed on “Terrorize Brutalize Sodomize”. The photos and graphics for this album – created by Henrik Hedlund of Chaos Media – is by far the most explicit graphic material Vomitory has ever had, and eventually it got banned in Germany.

In 2009, Vomitory celebrated 20 years as a band and released their seventh album, “Carnage Euphoria”. A special anniversary party was held in Karlstad/Sweden, to celebrate not only the two decades of Death fucking Metal, but also the release of “Carnage Euphoria” – an album that held their most varied and dynamic material to date. Once again the production bore the mark of Rikard Löfgren and Leon Music Studios.

Right after a 30-date long European tour together with U.S. death metal veterans Malevolent Creation in September 2009, Vomitory started writing new material for the next album. Roughly one year later, they entered Leon Music Studios for the third time to record their eighth and latest album, “Opus Mortis VIII”. Producer Rikard Löfgren outdid himself once again in getting a heavy, brutal, powerful yet very clear production. The new material takes another few steps forward from the predecessor, and it offers diversity and dynamics that you haven’t quite heard from Vomitory before. Still, this is a very intense and aggressive album in the true Vomitory tradition – the essential signature details are all there. The limited edition of “Opus Mortis VIII” also features four bonus tracks, which are re-recorded Vomitoryclassics from their first two albums. The album artwork is done by Polish artist Lukasz Jaszak, who pinpointed the band’s artwork desires to the fullest with his skills. Touring plans for 2011 are now in the works, to get out on the road again to promote the new album. “Opus Mortis VIII” will be released through Metal Blade Records in April 2011.

“Our Solar guitars are bad ass grinding metal machines, and like a perfekt space anus they’re black and tight!”