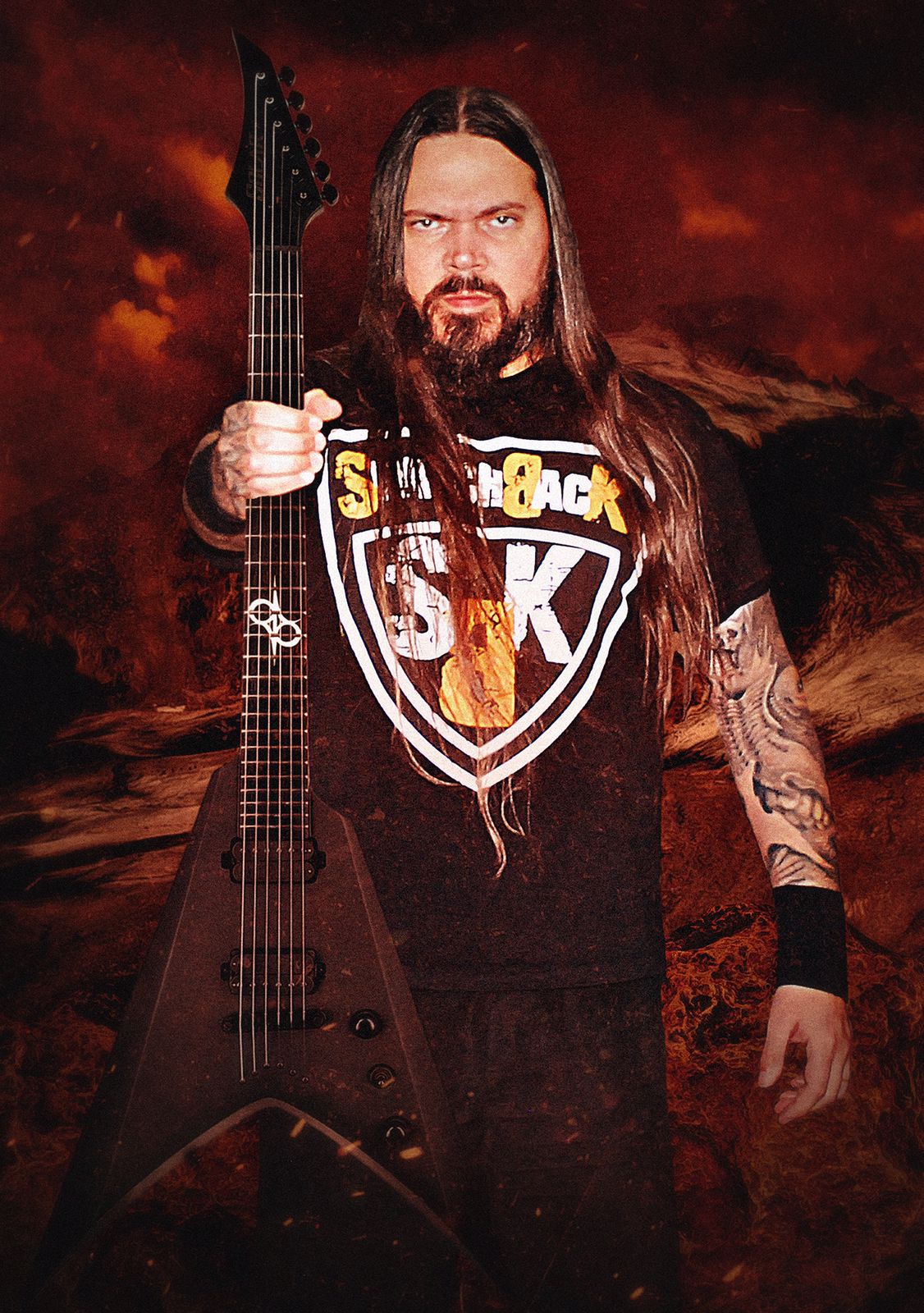 Marcelo Vasco is a brazilian guitar player (The Troops of Doom, Patria and other studio projects) and an acclaimed graphic artist since the mid-90s, focused on print media, specifically artwork, CD/LP/DVD/ BOOK covers, merch & apparel, and all other promotional designs for the metal musical culture. Over the years he has created artwork for numerous highly influential bands including Slayer, Machine Head, Kreator, Dee Snider, Soulfly, Hatebreed, Dark Funeral, Dimmu Borgir. He’s also head of graphic department for AISA (All Independent Service Alliance), with offices in North America and Europe. Marcelo had his work recognized by the metal media as part of the one greatest metal graphic artists today and also had his art printed in many publications including books like Arte Arcana, And Justice for Art #2, Metal & Hardcore Graphics, Darkadya Book #2 and magazines like Heavy Music Artwork, Inside Artscum etc. He was awarded with 1o place trophy in the North American award “Black Stars Awards”, hosted by Darkadya Books, in the category “Master Artist”, and also has presented his art exhibitions at Inferno Festival in Oslo/ Norway (2015), Tattoo Week Rio (2016) and at the amazing Comic Con Ecuador (2017). In 2018 he was invited to talk about his artwork at “THE NOITE com Danilo Gentili”, the biggest Talk Show on Brazilian TV.

The Troops of Doom Bio:

The band released their debut EP, The Rise Of Heresy, worldwide in October 2020. Despite its brevity, the offering reaped critical accolades from fans and media alike with Decibel Magazine hailing the band’s distinctly, “mean, mid-paced death metal that cycles between foreboding and downright groovy” adding, “when the grooves hit, it’s hard not to bang your head.” Bravewords lauded, “a demonic thrash attack with killer riffing and bombastic drum work” while BrooklynVegan noted “The band intentionally hearken back to the evil, thrashy, proto-death metal sounds of early Sepultura (and to Sepultura’s own influences from back then, like Celtic Frost), and [they] do it with extreme conviction”

Their second EP The Absence Of Light was mixed and mastered by Øystein G. Brun (Borknagar) at Crosound Studio in Norway features the legendary Jeff Becerra of Possessed sharing vocals on the track “The Monarch,” and Lars Nedland of Borknagar, Solefald, and White Void on bass on the first three tracks. The EP includes a version of Sepultura classic “Antichrist” in addition to the demo version of “The Devil’s Tail” and “The Monarch”. With the world still uncertain in these pandemic times and the band being forced to postpone their European tour — and consequently their full album — to 2022, EP serves a bridge piece to the impending LP.

Now at December 11st the band, that was formed in the middle of pandemic, finally debuted their first live show ever in São Paulo and it was insane!

Currently THE TROOPS OF DOOM is working on the final stage of their anticipating Full Length Album “Antichrist Reborn”, that was mixed by the renowned Peter Tägtgren at The Abyss Studio and mastered by the great Jonas Kjellgren at Blacklounge Studio. The album brings special guests like João Gordo from Ratos de Porão and the brothers Moyses Kolesne and Alex Camargo from Krisiun. The release date is being planned for end of the first semester of 2022, on CD, Vinyl and Cassette by Alma Mater Records and digitally via Blood Blast.

Solar is definitely one of the best guitars I’ve already played in my life, fits wonderfully what I always searched in matter of sound and confort, and it’s really exciting to have the chance to be an official artist of this great brand.

Marcelo Vasco – THE TROOPS OF DOOM/PATRIA On social media