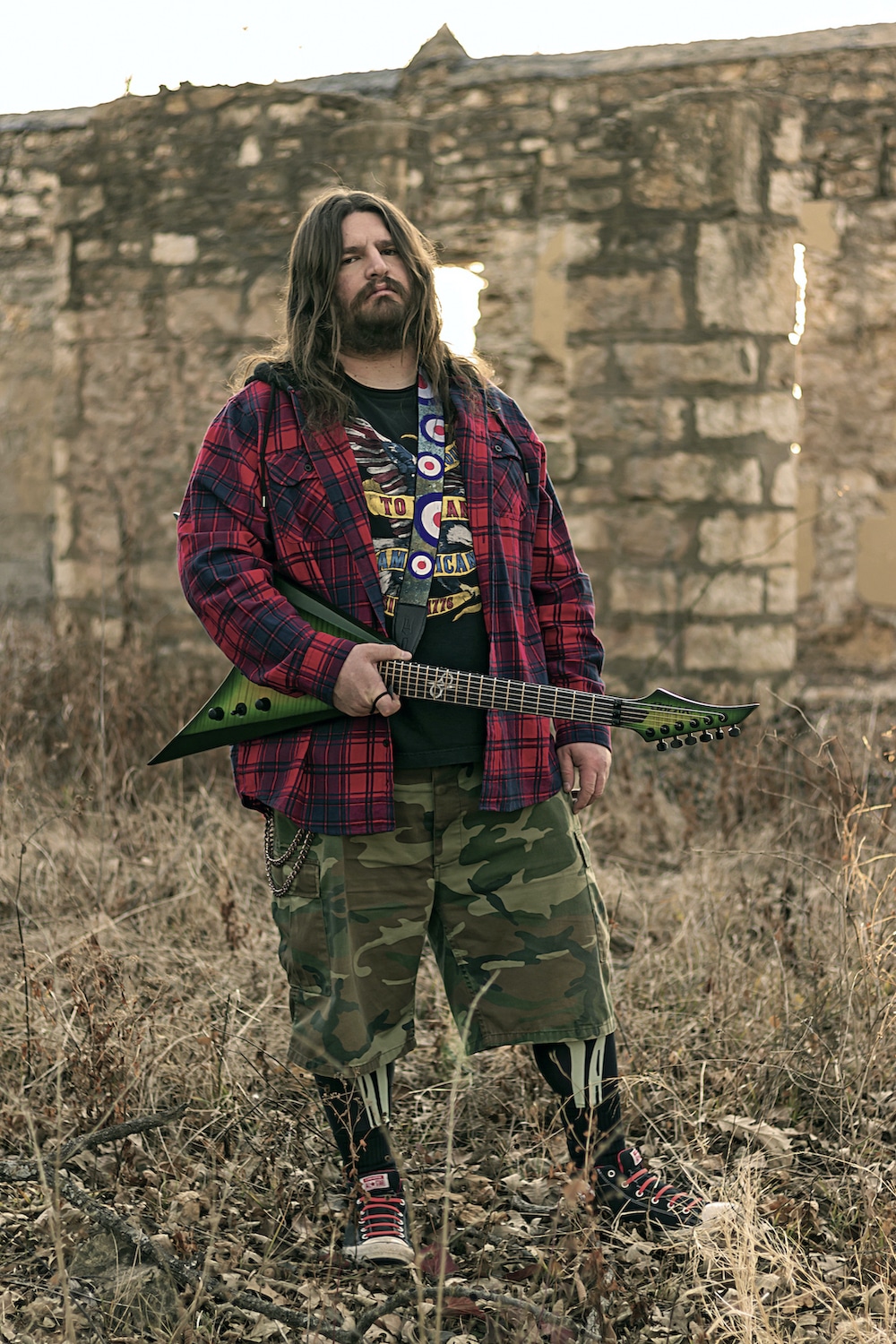 When combining metal and Kansas, many automatically think of the veteran Manilla Road from Wichita – R.I.P., Mark Shelton! SARKOPTIC from Topeka go completely different ways with their riff-emphasized, groovy metal.

The four warhorses don’t just look like veterans: guitarist Jimbo was a metalhead as a child thanks to his older brothers, bassist Richard played in many bands. Brian, who is a powerful colossus with the ironic nickname Cupcake, whose comfortable garage is SARKOPTIC’s rehearsal room, started

playing drums in high school. “After three years, I stopped and started my family. I only picked up the sticks again in my mid-30s. ”The Fear Factory fan is an avowed bass drum trigger enthusiast. “Local bands without often sound very muddy. Maybe trigger opponents are just afraid that you will hear the mistakes. ”Howling Josh gained his first experience in a grunge rock band. “When I joined

SARKOPTIC, I learned many other techniques here. There was a lot of trial and error. ”The comment that one had become the 17th best metal band from North Topeka a few years ago was of course pure sarcasm by Jimbo. “The city is shit when it comes to metal!” Josh agrees. “The music

scene is very focused on hip hop. It’s not that bad in the surrounding area, but everyone has their own cliques there. We are the only groove metal band locally that plays our own material as far as we know. We had several gigs with Imajjjin, last year with Broken Skulls, whose show I enjoyed. When I was a teenager I got the first two Korn albums in my lap and have been a fan ever since.

Bloodhound Gang, Jimmy’s Chicken Shack and the Eminem debut have also shaped me. I only really got to know Lamb Of God and Pantera when I moved to Kansas. ”While Slayer does not have

to be explicitly mentioned as an obvious influence in the collective opinion, Pissing Razors stand out from the short list of band faves. The men had released their last album in 2003, and some early works appeared in the 1990s for the local pioneer label Noise. Amon Amarth, who are praised for wearing shirts and the text of ‘Plunder And Blood’, can hardly be heard from the four SARKOPTIC songs so far. As Richard, Jimbo finds all kinds of music inspiring. “Pop, dance, country, whatever. If

it is well done and has a hook, I like it. ”Josh instinctively tries to use details that he likes about

other singers. “But I want it to sound damned like me anyway, because copying, if you can create something of your own instead, is rubbish. I just pick up fragments and spin a new story around it, it’s like a video game that runs in my head. ”What the men loosely describe as “tossin’ the pigskin”

as a hobby turns out to be American football. Therefore, a match against Iron Maiden is rather excluded. “Yeah, I’m pretty competitive,” laughs Jimbo when asked if he would foul Steve Harris. “Iron Maiden would not want to compete against us. Josh would be able to throw a football over

them mountains” ” Here, exactly who does not describe himself as an athlete so established. “But when I was young and everyone loved it, I was very enthusiastic about skateboards and wrestling.”

Everyone can agree on drinking beer – and on whiskey, as Josh, who has some brewing experience himself, throws in. “My favorite beer is cold and free,” grins Jimbo. “Topeka’s Blind Tiger Brewery has won a world championship. But in everyday life I love Coors Light and New Belgium 1554, a dark lager. ”